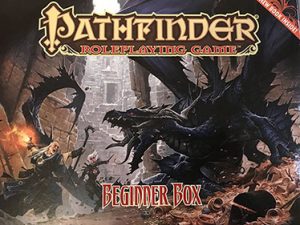 Pathfinder is a role playing game (RPG) system based on the open-source version of Dungeons & Dragons 3.5. It’s published by Paizo Publishing. Paizo publishes Pathfinder print and PDF rulebooks, campaign settings, adventure modules, and other guides, available at Paizo.com.  Pathfinder system rules can also be found online at the Pathfinder Reference Document (PRD) at the Paizo site (http://paizo.com/pathfinderRPG/prd/) and at the d20pfsrd (http://www.d20pfsrd.com/). These contain all the Pathfinder material freely available under the Open Gaming License (OGL). Some Pathfinder material, such as campaign settings, pantheons of deities, artwork, etc., is covered under standard copyright, and will not be found in the free online resources above. There are also many third-party add-on materials for Pathfinder, including modules, settings, and other guides; both free and for-purchase third-party Pathfinder products are available at Paizo and at RPG resource sites like DriveThruPRG (my personal favorite).

Teens can probably dig right into the Pathfinder Core Rulebook, but younger kids (particularly those with parents who are also new to the system) will likely have an easier time with the Beginner Box.

The Pathfinder Beginner Box is a boxed starter set that introduces a simplified version of the Pathfinder rules, with a pared-down list of character classes and races. It comes with a DM Guide, Player Guide, dice, character sheets, pawns (cardboard markers for representing heroes and monsters on battle maps) and instructions for creating four classic character classes (fighter, cleric, wizard, rogue) using three classic races (elf, human, dwarf). It’s available on Amazon as well as at Paizo.com, the home of Pathfinder. http://paizo.com/products/btpy8osv?Pathfinder-Roleplaying-Game-Beginner-Box

Some extras for the Beginner Box include the following.

The Beginner Box Player Pack contains rules for the Barbarian character class and new class options for the base characters. http://paizo.com/products/btpy8p2k?Pathfinder-Roleplaying-Game-Beginner-Box-Player-Pack

http://www.pfbeginner.com/ is an unofficial reference site for the Beginner Box and is a handy searchable online reference.

Standard Pathfinder modules with themes which work well for kids/beginners and/or can be easily adapted to Beginner Box rules: